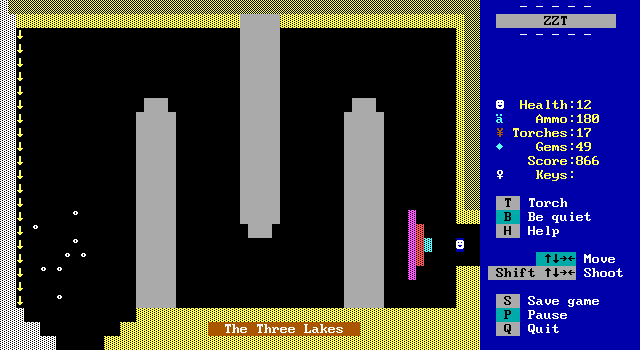 This time, we head west to one of my favorite rooms. The three lakes forces the player to navigate a ping-pong path without getting shot by any of the spinning guns. A small shield at the start allows safety if the player should give up, and have to return again later, preventing them from entering the board and immediately getting hit by an old bullet.

Ping-pong paths are generally considered to be a poor design choice, and they are, but in this case the path is meaningful, not just lengthening travel time. The player will also usually have an easier time returning as now they can run with the bullets rather than into them. 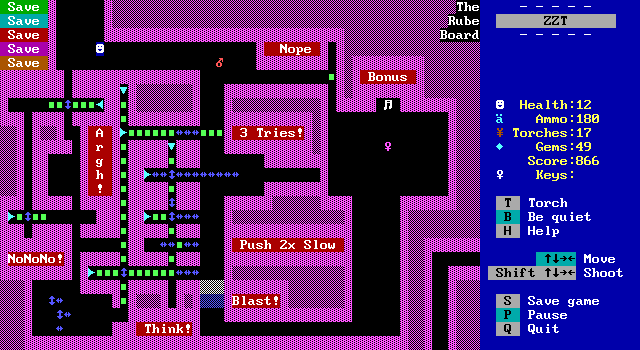 And then we get to the Rube Board. A lot of people find this to be a difficult puzzle, and if you are a child I will forgive you for it. The challenge with this board is the lack of guidance and the false "three tries" hint.

If the player begins by rushing into the main area, they will immediately be unable to complete the puzzle. As the top horizontal slider moves east, the long vertical chain will move south, moving the ns slider and causing the bottom horizontal pusher to block the path. From this, we can deduce that we have to complete the left area of the puzzle first.

Going through the left path we encounter a trap right away. If we push the slider south two times, we will have no exit route and be stuck. Pushing it once and moving west with the pusher will let us safely get in.

The second pusher however, is safe, riding it across will leave us with a boulder we can push to escape later.

In the last section, a small pile of sliders exists, it's much more of a trap than it appears. Though, some simple untangling allows us to push a slider blocking the long vertical pusher's path. This ensures us we won't block off the breakable walls.

Now we exit slowly, pushing the boulder up without pushing it so much as to block us in like we could have with the very first slider. With that complete it's time to solve the rest of the puzzle.

The previous parts of the puzzle often resulting in being trapped may lead players to believe that they should push the bomb now, but this will not work. The room is designed to prevent it, as those sliders extending into the main path will prevent you from getting the bomb any father south.

Going in without the bomb, leaves us with 2 "tries", we can exit once, and enter once more. Other than that though, there is just one section left we can interact with, the set of sliders with no pusher. Pushing it once to line up the boulders at first seems promising, as the horizontal sliders blocking the bomb path moves away, however after a few cycles, another boulder lines up, releasing another pusher which traps us again.

The solution is to push once so that the first slider gets out of our way, and then push again, prevening ourselves from being locked. Once this has been done, we can exit with the second boulder, and push the bomb and third boulder all the way to victory. 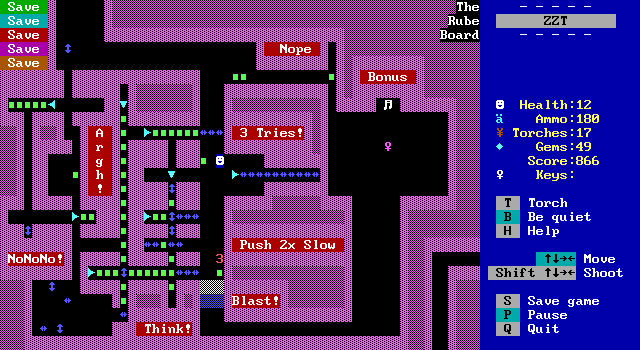 For completing Town's most fiendish puzzle we are rewarded with our third purple key and 1000 bonus points. 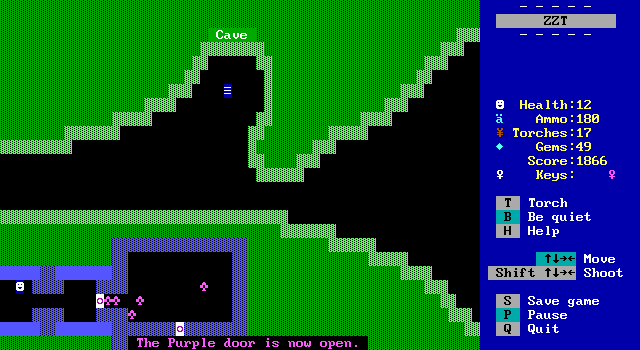 The third door has ruffians behind it, and they tend to position themselves in the doorway making it very risky to just open the door. I actually went around to the rest of the board and tried to flush them into a corner so that I could rush in without immediately being hit. 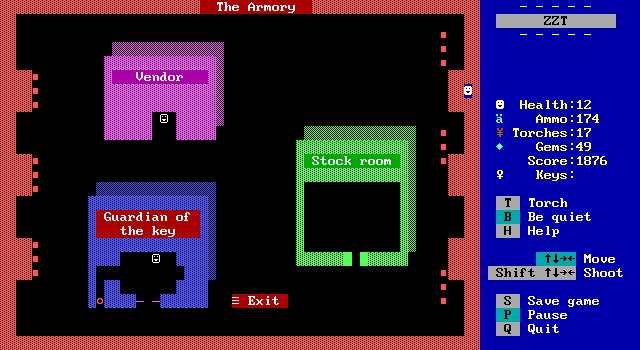 Back in the armory we can now search for the secret passage behind the boulders that the ZZT bandit warned us about. Sure enough behind the top right set there is a hidden path... 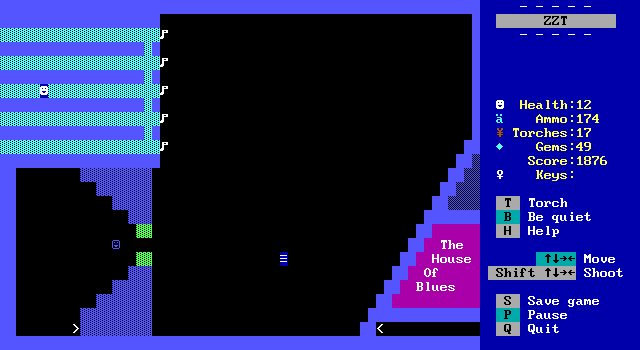 ...to the House of Blues? There's no particular reason for this, other than possibly to serve as a hint of what's to come if the player hasn't gone east from the town hub yet. You can actually solve the puzzle from here, though there's no real benefit. 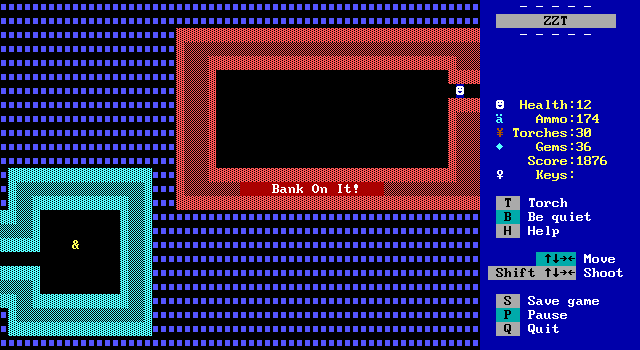 Instead the ZZT Bandit was telling us of the secret path behind the western boulders instead. Here the player gets an introduction to invisble walls. 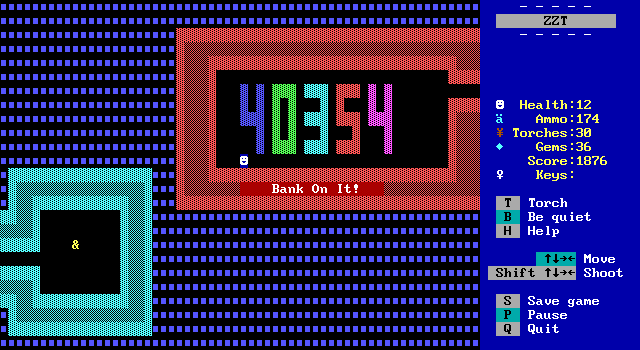 Touching an invisibl;e wall causes it to appear permanently. It also plays an annoying sound effect. I'll comment more on invisible walls when we encounter some more later. For now, we have our password, 40354. With it, it's time to rob a bank. 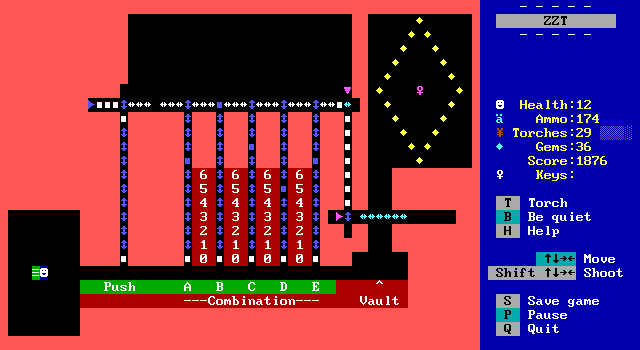 The bank is dark, solely to hide the circuitry. I don't like the "Push" button being at the very beginning. A new player will see "Push" before anything about a bank combination and likely will push it, making them fail at opening the vault and forced to start over. There's also no game over for putting in the wrong combination, allowing the player to get 4 purple keys for nothing. It's not even mentioned anywhere that the vault contains the last purple key (though it's easy enough to deduce).

The blue pusher is actually an object that after it moves the first time, waits and checks to see if it can move again. If so it displays a message telling you the vault is open. If not, it tells you it's now closed. I bring this up solely because it also has commented out #play commands (which are a tad grating). I don't blame Sweeney for getting rid of this.

Opening the vault gives the player the fourth purple key and 20 gems, which more importantly means 20 much needed health. 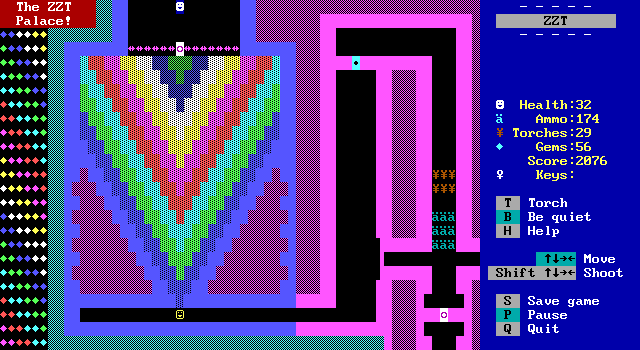