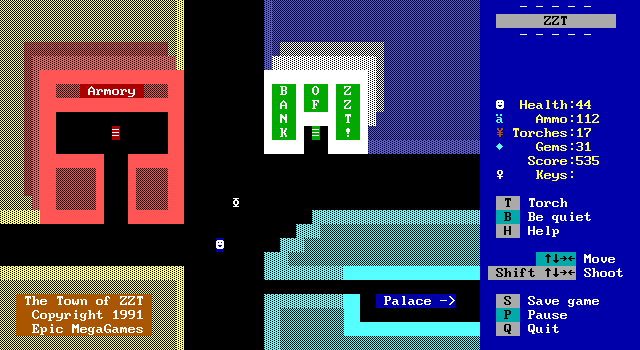 Back at the hub the player opens their first purple door and immediately meets with the second. For this update I'll be going south. 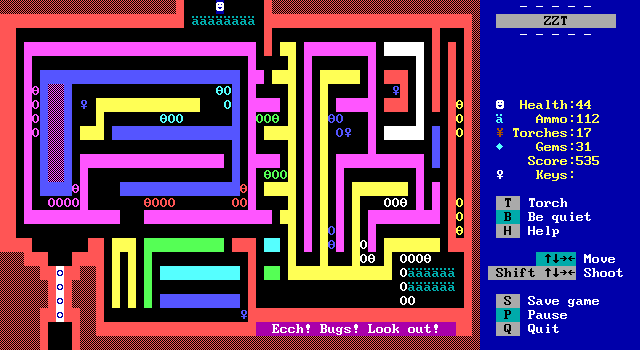 South has always been the first direction I traveled in, getting plenty of ammo right away. Since they player could be entering any direction as their first, there isn't much difficulty progression in Town. Again we see mostly narrow corridors where we can safely shoot without missing. As with other action board, only one bullet can be on screen. If the player is unaware only one key can be held at a time, they'll likely learn it here. The enemies are also far enough away from the entrance that the player won't be ambushed without being ready. 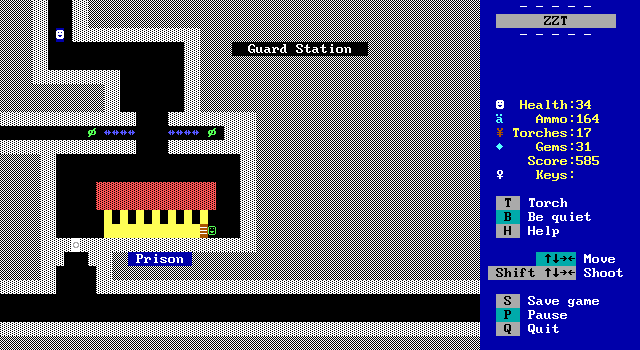 The guard station shows that I was wrong, the mysterious yellow object is here, just in green. Talking to the prison guard lets the player inside, but also shuts the gates behind them committing them to the southern path unlike the east, where they were free to give up and change direction. 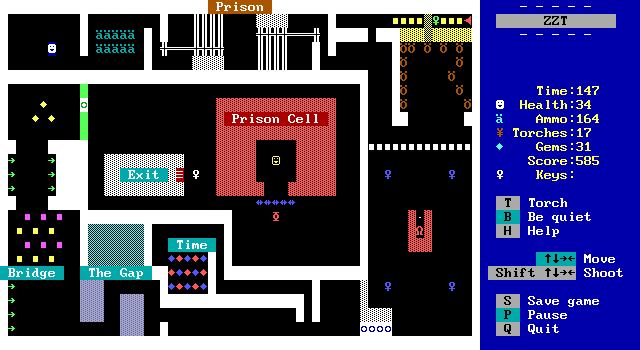 I quite like the prison board, and recall very early on making my own boards similar in style to it, with blink walls and spinning guns. The time limit on the board is fairly tight, enough that the player should hurry, but not so much so that they have to play perfectly. Getting hit by an enemy resets the timer and player's position as well where hopefully the player will have made enough progress that they can move faster on their next attempt.

Despite the gems saying "Time", they don't give you additional time. Though they do give enough to make up for getting hit once. Another "puzzle" has the player positioning boulders to safely cross the narrow path of the final guns. 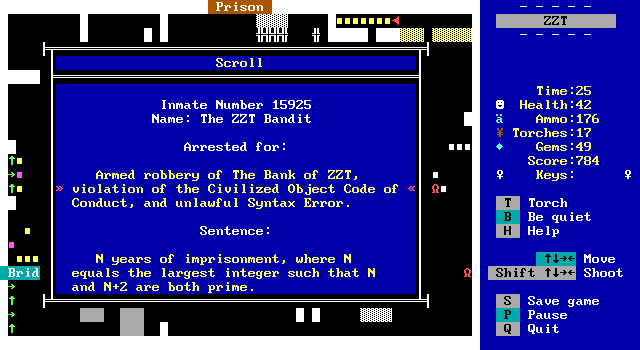 The goal of our run through the prison is to set the ZZT Bandit free, which leads me to wonder just who is the player anyway that he's breaking convicted felons out of prison. Regardless, as a reward the bandit tells us of a secret passage in the armory that will give us the bank vault's combination. 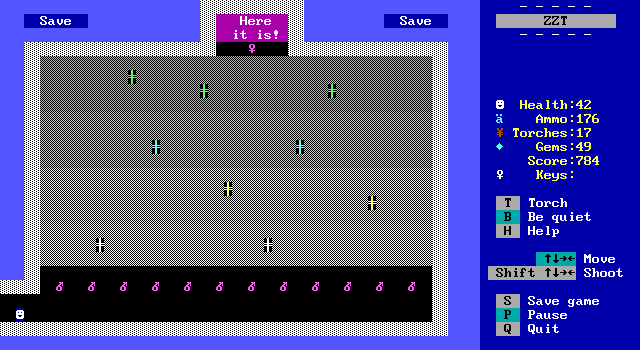 Leaving the prison the player is given two paths, heading right takes them here, to the second purple key seen. In contrast to the prison, I hate this board. Conceptually it is great. The player has to use the bombs to blast away the wall, while making sure not to hit the objects which will begin throwing stars which home in on the player at him, slowly, and constantly.

Unfortunately, the puzzle falls quite flat due to a design flaw. Bombs can be pushed by things, and stars can push things. It is very easy to have bombs moved away from their position. In addition, stars linger for quite some time, making it essentially impossible to solve the puzzle once a handful have been spawned. It is also impossible to solve without bombing at least one of the star generators, which spawn the first star after 3 seconds, and then every 8 seconds afterwards. 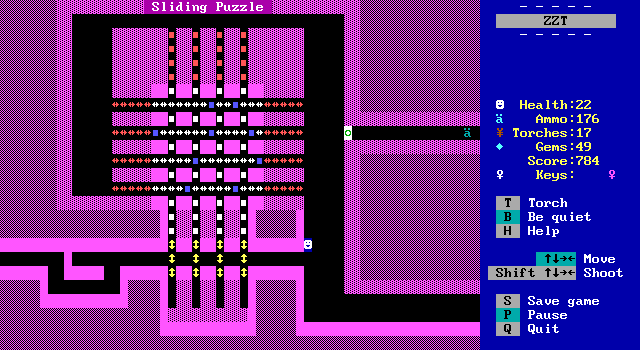 The left path contains a sliding puzzle. This one is simple, and forgiving in that you can undo a bad push as long as you don't do so to the point where the sliders touch the side walls. It also gets easier as you go along as more sliders are replaced with boulders.

A green door whose key is acquired in the next room is also shown here. It is possible to skip this next room if you get the green key to the armory and never use it there. Whether this is intentional or just a coincidence (after all, there was a 1 in 6 chance of it happening) is unknown. 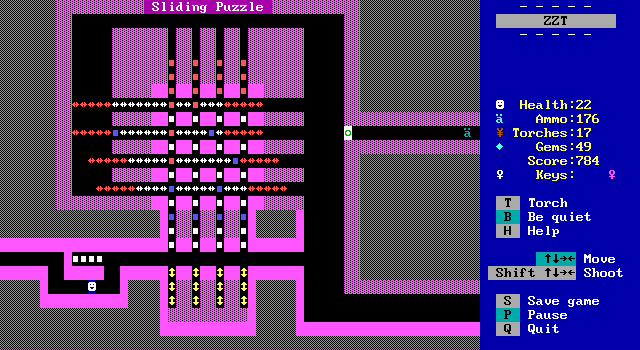 The solved puzzle looks something like this. Reader solutions may be different than pictured above.

The final board of the southern path is another action sequence. This room is much more challenging than the ones seen so far. The bears will introduce the mechanic of tearing down breakable walls (and destroying themselves), but only if the player is patient enough to let them get that close. The room is significantly wider and open. No more luring enemies into narrow paths. The key's positioning would've been a bit nicer if it was one more to the south. I got shot by tigers that were supposed to be at the end that moved towards the room's entrance this way.

The tigers and their strange ZZT ability to shoot bullets are also first seen here. The breakable walls of the later areas are likely to be worn away a good amount by the time the player reaches them so you do have to be quick about things. Limited to one shot at a time, they are also heavily outgunned.

With the green key acquired, the player may return to the prison and shoot the pusher object causing the one on the right to resume pushing the sliders westward. This forces the player to go the long way around rahter than just having the sliders disappear.

Two keys down I am now dangerously low on health. Fortunately the next two keys will involve zero combat whatsoever. I would like to complain that the one thing you can't buy from the vendor, is health.