Firstly, let me say thanks to everybody who's supported the Worlds of ZZT Patreon. It is very exciting to be able to write about this sort of thing and know there are people out there who are interested in it!

I also know that the Patreon was started without any specific examples of "This is what I'll be writing" other than a few old blog posts. Hopefully this will provide a good reference for the sort of material to expect! I'm also very open to hearing your feedback and comments, so please do not hesitate to let me know your thoughts both on the subjects of these articles themselves as well as their format.

With that said, let's get right into the first world to be featured in the Closer Look series: Dungeons of ZZT 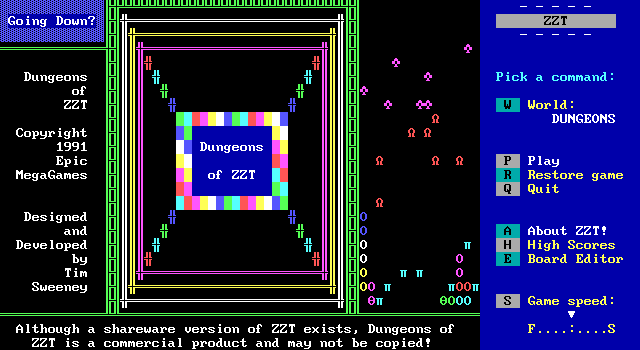 Dungeons of ZZT is one of the original ZZT Worlds and serves as the sequel to Town of ZZT. The file is dated November 2nd, 1991, making it just shy of 25 years old at the time of writing.

Unlike Town, Dungeons was a registered world and not part of the Shareware ZZT package. It cost $6 on its own, or as part of $10 and $12 bundles which included the other official worlds (City and Best of ZZT that is, Caves was a bonus included with any registration). So how does it compare to Town? Let's take a look! 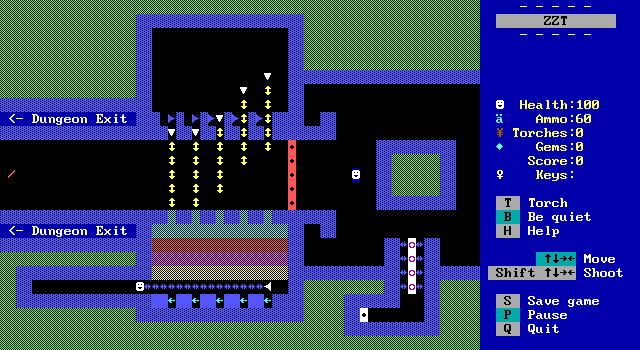 In contrast to Town's static hub, Dungeons begins with the player's back to a moving wall, shoving them inside and locking them away in the dungeon. A scroll and ammo await the player to give them the game's story and goal. The "Evil Dungeon Guards" have captured you and thrown you inside the dungeons. The only hope of escape is to traverse the forty-five rooms of the game and this time, collect the four purple keys. 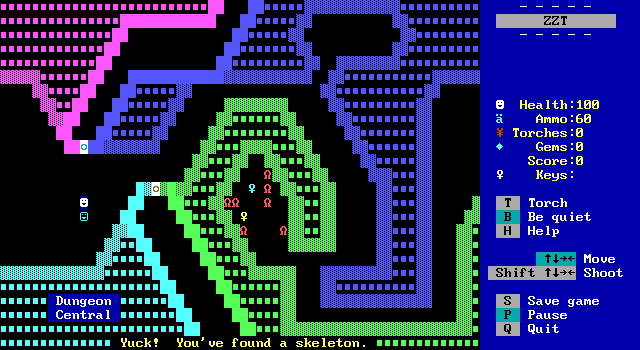 The hub format isn't actually abandoned, however. Though two of the three paths are locked, the keys are there on the very same screen giving the player a chance to open them up after a brief encounter with some lions. For my playthrough, I opted to head east. 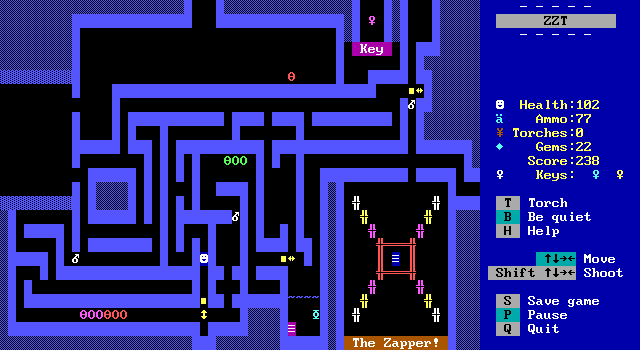 Following the path leads to a screen with a simple maze containing some centipedes and sliders which much be pushed out of the way to progress, as well as a purple key taunting the player. 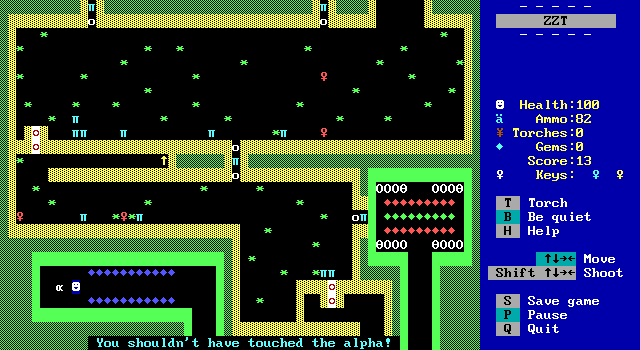 Heading north in hopes of obtaining the key, instead brings the player to a small section of a larger room, with a series of scrolls warning them that touching the alpha is certain death. I touched the alpha. I was instantly killed for it. This is game design.

There's nothing else you can _do_ with the alpha. You can touch it and die, or ignore it and live. 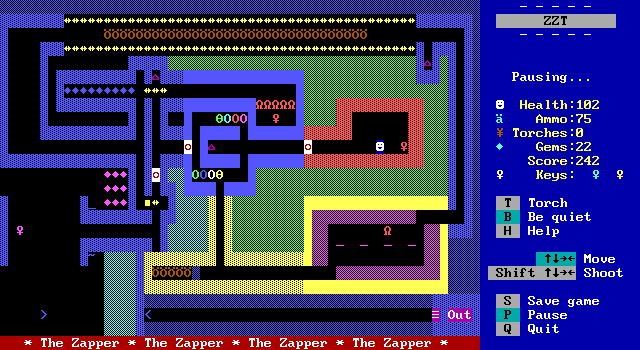 On my second attempt, I opted instead to head into "The Zapper", a board where the player is blocked from shooting and instead has to rely on energizers to make themselves invincible and run into the creatures instead. A lot of what Dungeons does, is tries to make interesting scenarios to fight against ZZT's default enemies. We'll see a lot more like this progressing through the game and I feel that Dungeons does make very good use of them.

Later on amongst ZZTers, these basic enemies were seen as primitive, and their usage was frowned upon compared to coding your own enemies instead. 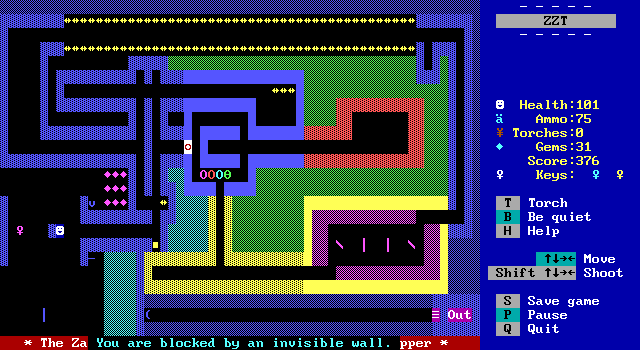 Also of note, is that the lower left corner of the screen contains an invisible maze. I personally never found any fun in mazes like this one where there isn't any actual danger.

For completing the Zapper, the player receives the first of the four purple keys.