So DavidN's recent post reminded me of something (besides Doom).

Back in 1997 I picked up an old Shareware CD with a million and one games on it. One of these my brother and I found was "Hugo's House of Horrors" an adventure game where Hugo must rescue his girlfriend Penelope from a haunted house which she was stupid enough to take a babysitting job at.

The game was a standard command line adventure game, move with arrow keys and type what you wanted Hugo to do. However there was one big problem 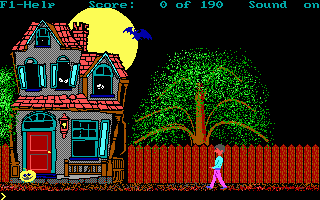 We had no idea how to get past this first screen. Opening the door was met with us being told it was locked. The window was closed as well. And apparently that fence is too high to climb. I might believe that, but Hugo could totally stand on the porch railing and then step up to the fence.

We'd come back and try again to figure out how to get inside the house to no avail. Eventually I got frustrated and decided that if I couldn't rescue Penelope from the clutches of the monsters inside I would commit petty vandalism. 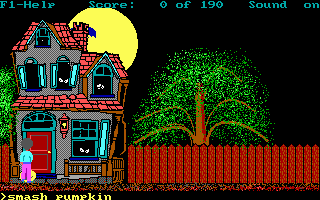 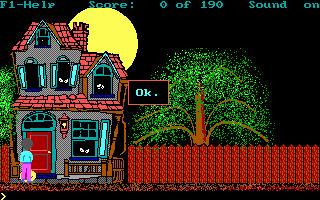 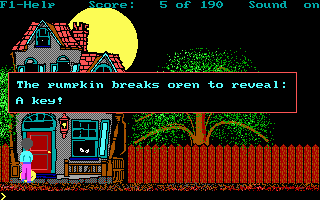 So now at least the game was open to us, we had a few rooms we could look into, heading right from the foyer brought us to a cool monster party 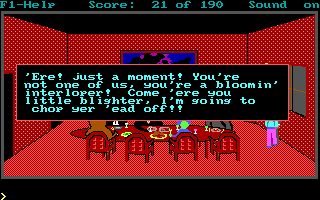 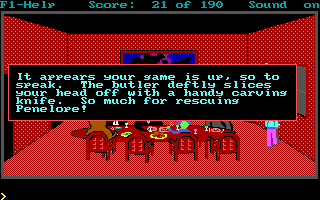 And thus was the first of many deaths in Hugo. 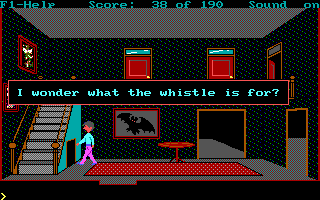 Next we discovered that by taking the candle from the table we could look into the cubbyhole beneath the stairs and pick up a pen knife and a whistle. The purpose of which was unknown so we did the logical thing 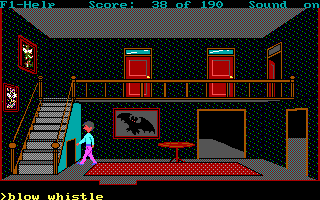 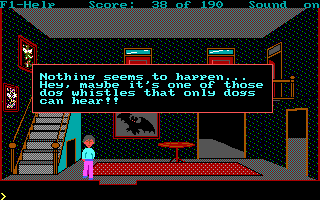 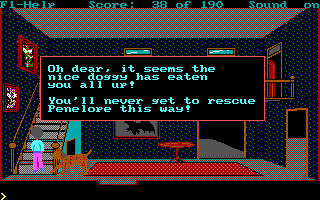 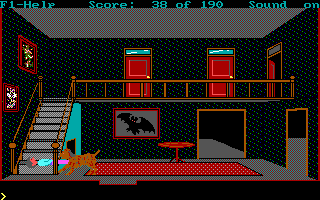 It was a pretty cruel game. It didn't help that when the dog showed up "How much is that doggie in the window?" began to play. 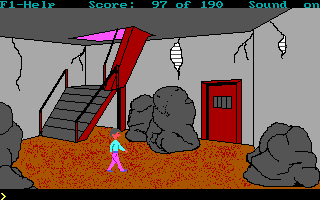 This was as far as we ever got back then. We fed the dog a pork chop we got from the butler by wearing a mask to make us looks like a monster and found the secret trapdoor to the basement. Through the door is Penelope but it is locked and we could never find out where to go next. Those two intersecting rocks between the door and stairs in fact have a secret path to a cave between them. That was certainly obvious.

Venturing through the cave and navigating past some bats led to this exercise in frustration: 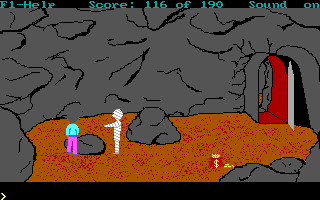 The mummy moved about three times as fast as Hugo who could only briskly walk away from undead horrors out to kill him. You beat him by running around the rocks so he gets caught on them since his AI is just to beeline towards Hugo regardless of obstacles in the way. I didn't pick up the treasure when I took these screenshots because I figured they were just bonus points. 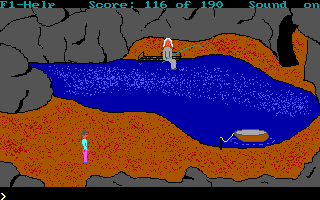 After escaping from the mummy you come into this cavern with a lake. I like how Hugo is tiny in this room but the old hermit is sized like every other character in the game so he must be a giant. So you cut the rope, plug the hole in the boat and head across but the old man won't let you leave until you answer his trivia.

Let's see how far you can get with these questions.

Q: What was the name of the hero in "The Hobbit"?

This one is easy enough.

Q: Where did Aslan live? (Hint: Not in a wardrobe)

Probably not common knowledge but nothing too out there.

Q: What should you do with a pan-galactic gargle blaster?

Could be difficult as this series isn't as well known as the previous ones, but this one is multiple choice.

Q: What's the name of the only mammal that can't fly that can fly?

I'm going to have to save you the time and link to the Roy Rogers wiki page.

Q: Did you register this shareware?

You better get this one right. 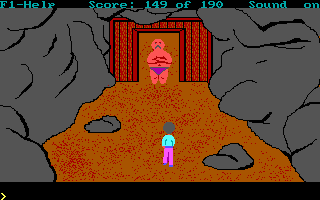 This guy. He doesn't do anything unless you give him your treasure. You know, the treasure I forgot to pick up from the mummy's room. Well I guess I'll go back and run past the mummy caught on the rocks. 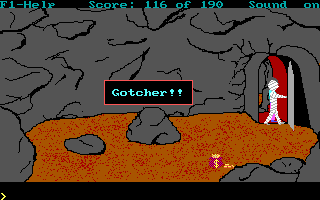