I felt like playing some ZZT today, and decided on a game I recall finding to be a really creative ZZT world, that was a bit too frustrating to really enjoy. The game is, "Operation: OBRIAN" by Chase Bramlage. 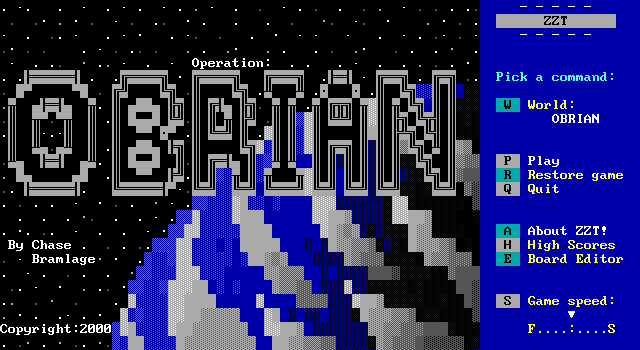 Released in 2000, I don't recall this game getting much attention. Perhaps its flaws were too much for what innovation it offered. While most ZZT worlds either went for guns blazing action, or avoided combat entirely, Operation: OBRIAN instead opts for a game where you'll be relying on stealth to survive.

The plot is typical teenage sci-fi and told via optional cut-scenes in the main menu. A military exercise involving blowing up an uninhabited planet goes awry when the SS Jerimiah Obrian suddenly changes targets to the nearby planet of Caliope, population 3 million. All efforts to contact the ship have failed, and the security droids have been activated. To send a manned party on board would be certain death, and the military opts instead to send a remote observer droid to solve the mystery of what happened on board, and either alter the ship's target or destroy it entirely. 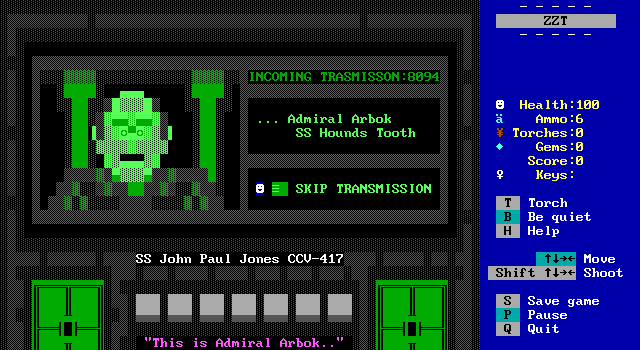 When you begin the game proper, you receive a briefing summarizing your mission (for those who skipped the introduction) and are treated to a rather well done animation of the Mark IV Observer Probe Droid approaching and docking with the Obrian. It caught me off guard how well the gaps between the stars were placed allowing each frame of animation to draw.

Now on board, you can take control of the probe, but you're not asked to dive into such an unusually handled game without warning. The main menu also offers a tutorial which covers what you'll be up against and how to deal with it. 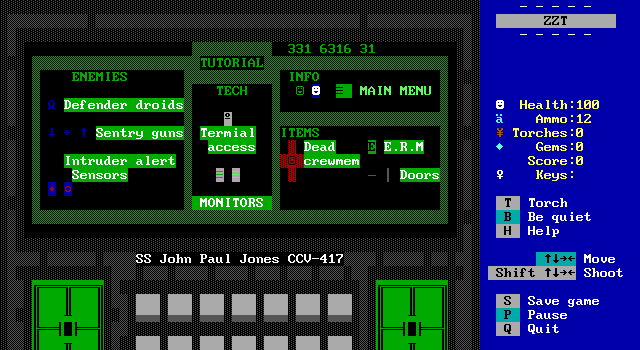 So let's cover these mechanics. For starters, you have no weapons. Your probe is unarmed and has to avoid enemy droids and sensors. Secondly, you only have so much energy (represented as health) to power your systems. It slowly depletes over time and you'll have to find Energy Recharge Modules scattered throughout the ship. Third, what you do have, is a DNA scanner letting you take samples from deceased crew members and use their genetic code to gain access to more restricted areas of the ship as well as terminals. However, taking a DNA scan takes time. You'll have to sit next to a body and wait for the scan to complete, all the while hoping the security droids don't catch you in the act.

The enemies themselves are all fairly basic, the security droids slowly patrol throughout the levels, stopping regularly to perform deep scans. If you happen to be lined up with one during a scan you'll be spotted and the droid will begin actively chasing you down and attacking.

The sensors operate similarly though they remain in one location. Get caught by them and some combination of droids activating or sentry guns appearing will occur. The sentry guns will fire whenever you're align with them. 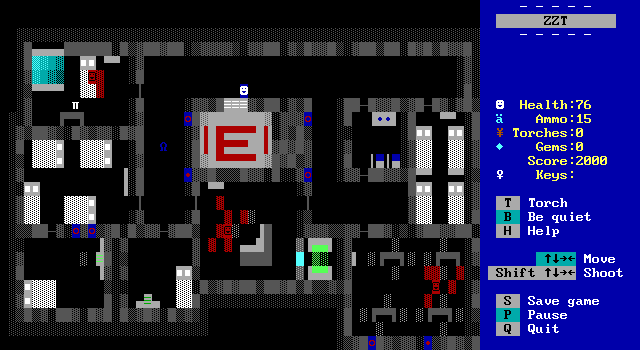 So the gameplay consists of navigating floors like the one above, with an elevator as a hub to take you between each level. There are six in total making for a fairly short game with lots of backtracking as you gain access to previously restricted areas. Every floor can be accessed from the start, though the game's actual progress is extremely linear. 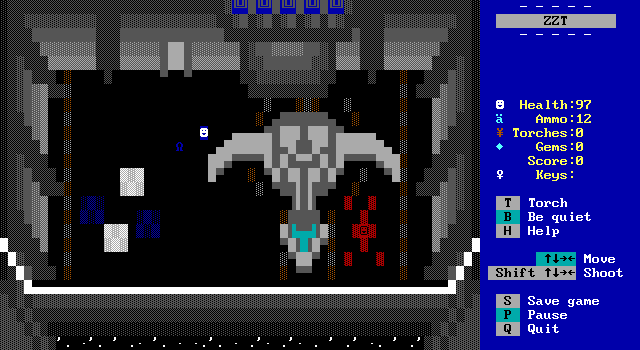 All in all the core idea behind OBRIAN is quite solid, and right from the start you'll find yourself carefully slipping past a droid in the hangar making your way to the first crew corpse in order to access the elevator. You'll watch the droid, noticing it steps in twos before performing a scan, and carefully positioning yourself so it will walk on by you, completely unaware of your presence. But don't get too excited, because it won't take long at all for the game's promising ideas to come crashing down from a mix of poor design choices and ZZT's own limitations. 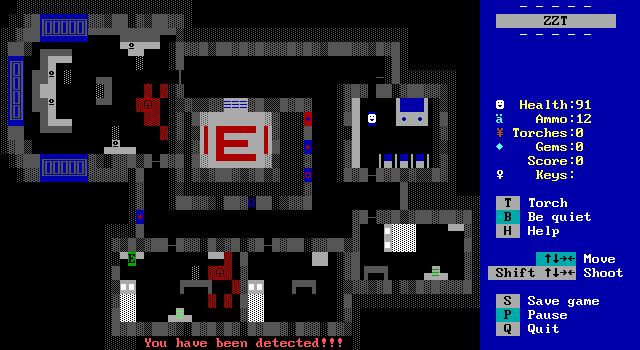 Here's the first problem. When an object in ZZT checks if the player is aligned with it, it does so without any regard for anything in between the two actors. In short, the enemies all have wallhacks and you will constantly find yourself being caught by droid and sensors in rooms that you are not.

Now one might think that this throws out any possibility of a stealth game in ZZT entirely, but there are some workarounds which Bramlage didn't implement that could have made things more bearable. The most obvious one is that the sensors are all embedded in walls and should only be looking in one direction. A simple check that they aren't blocked in the direction of the player when they're lined up with them would solve this.

The droids are a bit harder. They'll move around so just looking if they're blocked won't be enough. The levels of the ship however, are pretty distinctly divided into rooms separated by doors that funnel the player from one area to the next. A system could be implemented here to keep track of what "room" the player is in, and only allow droids patrolling that room to see them. Granted, this wouldn't be perfect, hallways with more twisting shapes would still have the issue, but it would go a considerable way to preventing most of the stealth snafus. 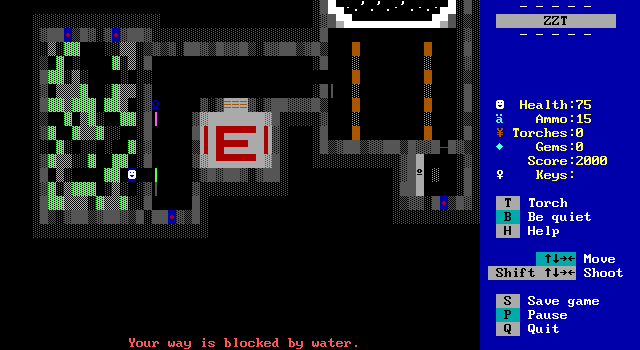 These flaws might be something one could overlook, but there's an additional issue in to what an angry droid is like. They attack with stars, and once you've been caught they will continually throw them towards you while slowly moving in. Once a droid is hostile, you'll take major damage attempting to work around it in most cases, and for the vast majority of the game have no recourse. Much of this game is getting caught by a droid through several walls, and reloading your save because the peanlty for being caught is so extreme. 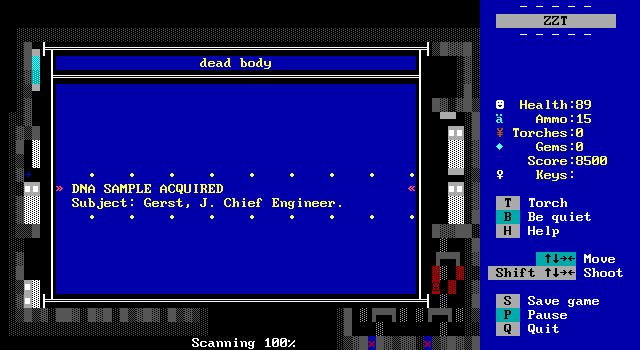 I'm not sure if this is a flaw or more of a personal complaint, but another issue I had with the game is the need to write things down. (Ok, as I write this I'm going with personal complaint). When you find a body and scan it, you'll learn the deceased's name and position on board the ship, and then that information is never displayed anywhere again. With some crew members what you'll gain access to becomes obvious such as the chief medical officer granting access to the medbay. Early on though, lower ranked crew members will require you to run all around as you try to find what they were allowed to touch. In several cases you'll need a specific crew member's DNA to access their private quarters so you'll also have to make note of their names as well. Should you opt to give this game a shot, I suggest having notepad open to record what's on each floor. 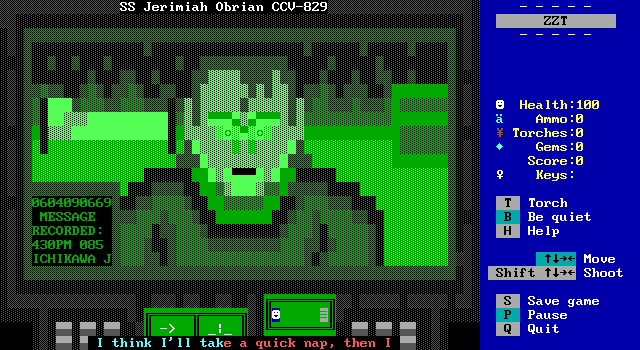 Getting back to the gameplay, eventually you'll find yourself gaining access to terminals which contain the last words of some of the crew. They'll often give useful passcodes to aid you.

Eventually you'll get access to the captain's private quarters and view his log, explaining the fate of the Obrian. In short, a crew member caught a bizarre virus, died from it, and it spread to the crew. The virus alters DNA which eventually causes the ship's security to believe the people onboard are intruders, locking them out of the ship's systems, and sent the security droids after them. As for why the Obrian switched targets to an inhabited planet, nothing was mentioned so yeah. The game's writing is not it's strong suit. Neither is it's gameplay, despite having what I feel is a very strong concept that could be done well with a few allowances for ZZT's limitations.

Despite hinting at there being a way to save the ship, the only ending is for obtaining the three self-destruct codes and destroying the ship.

The explosion is actually a very well done sequence! I've uploaded it to YouTube. watch the video

So that about sums up the game. I think as far as ZZT games go it's been pretty forgotten. I certainly never heard anybody mention it since its release. The game has good ideas, but fails to execute them in a way that feels fair to the player. It did get a sequel, however the reviews on z2 would imply that these issues haven't gone away. (Though I do recall you are able to shoot in that one.) I think it's a shame. I feel like this sort of game could be done within ZZT with a little forgiveness to its limits, but that it would also do well for a game in a more modern interface. Actually I bet Megazeux could do a killer job with something like this.

Overall, the game is short enough (it took me barely an hour to complete) that you can still find some fun with it despite its flaws. I wouldn't go out of my way to recommend it, but I'd say it's worth taking a look at just to think about what it could have been.